From the moment I decided to start this blog, I knew that I would also want to try and create a list of every player to ever suit up for the Beavers. There already are a couple of similar lists out there, but despite their impressive size, none are complete. In fact, the two largest are at best, maybe halfway complete. I'm sure that's more than enough for most folks, but for my, and this blog's purposes, a much more finished list is/was going to be needed.
I've spent quite a bit of time over the last few months working on my list, and even though it's still not complete, I've decided to publish it anyway. I'm hoping that putting out an unfinished list will inspire me to put in the extra effort to get it finished, as I've really started to slack off as of late. If I had to guess, I'd say that I still have around 1,500 to 2,000 more names to add to the list, but even so, what's currently up is still the largest list of former Beavers that I know of. I didn't anticipate it taking so long to complete, and as such, don't know when it'll be done. I'd like to think that I could finish it by summers end, but who knows. Anyways, if anyone's so inclined, the page is now up, and can be found up under the header (and yes, I know, I still need to figure out how to make the link more noticeable).
Oh, and for the couple of people who've been kind enough to ask, the all-time list also contains my list of specific cards that I'm looking to add to the collection, as well as the cards that I've already acquired. Unlike the all-time list, I haven't spent much time looking for the ideal card for each guy -- I've found that to be even more tedious than working on the all-time list. I'll be very surprised if I ever get the want list completed. And as far the all of the guys who never had a card, or other ephemeral item, produced with their likeness on it goes, well, in a perfect world, I'd seek out customs for all of them at some point; but I don't see that happening either. I'm thinking that I'll just have to make some kind of placeholder for all of them, and call it good.
Now that that's out of the way, I wanted to spend moment to publically thank, Jeff, from Wax Pack Wonders, for all of the behind the scenes assistance that he's been providing. Not only has he clued me into multiple sites for researching, he's also taken the time to look up a few things for me on sites that I don't have access to. He's also been kind enough share all of his crossover research that was acquired while working on his book. That material is particularly interesting because it deals with pre-Beavers baseball in Portland, and has given me an idea for a future series that I'm tentatively calling "Before there were Beavers". To say that Jeff's efforts have been appreciated, would be an understatement, but for lack of knowing how else to say it, they are appreciated, and I'm very grateful!
I had hoped to have another real post (i.e. one featuring a player) up by now, but am currently working on four write-ups, three of whom are guys that have yet to have anything written about them (at least online). Assembling all of the material that I've accrued, and trying to present it in an entertaining manner, is taking longer than expected (I think that that's going to be a reoccurring theme around here). As I've mentioned multiple times already, the kind of researching, and writing, that I'm trying to do for this blog is new to me, and has seemingly created somewhat of a learning curve. I have no doubt that the process will speed up as I become more accustomed to it, but for the time being, new posts probably won't be coming as frequent as I would like.
Coming soon: We'll be looking at a guy who was a big star in another league, joined the Beavers, then left before ever playing a single game for the team.
at July 23, 2021 8 comments:

Welcome to the Collection: Cuno Barragan 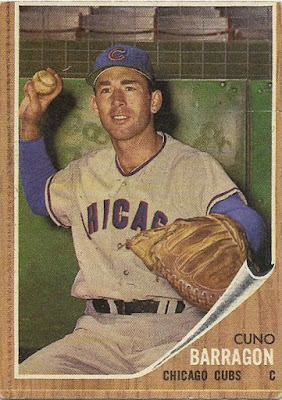 On July 3, 1958, Beavers starting catcher, Nini Tornay, was put on the disabled list after being injured by an errant pitch while warming up pitcher, John Buzhardt. With only one other catcher on the roster, Lenny Neal, and no timetable for Nini's return, Portland management decided to seek out someone who could fill in for their star catcher during his absence. 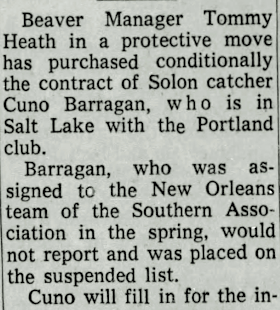 Being four months into the season, Portland wasn't left with a lot of options, but thanks to a minor incident some months earlier, the team was able to make a quick deal with Sacramento for the then suspended, Cuno Barragan.
The details of his suspension have already been covered elsewhere, but the short version is that after one season with the team, the Solons decided to send Cuno to New Orleans -- a decision that didn't sit well with Cuno. He felt that it was a demotion, and as such, refused to report. This was met by an immediate suspension by Sacramento. By the time the deal between Portland and Sacramento was struck, he had been sitting out for over four months. Whether or not he had played at all during that time is up for debate though.
This snippet is in regards to Cuno signing with the Roseville Merchants of the Placer-Nevada Baseball League sometime during the middle of June. From what I can gather, the P-N Leagues games took place mostly on Sundays, which in theory would've given him a few outings before his July 9th signing with Portland, but as of this writing, I can't find any evidence either way as to whether or not he ever suited up for the Merchants. Either way though, he was released by the team on the same day he agreed to go to Portland.
Nini Tornay ended up missing almost three weeks, and during that time, Cuno saw action in six games, going 5 for 20, with 3 RBIs and 0 HRs (these two stats are currently missing from Baseball Reference)  His .250 average didn't exactly set the world on fire, but he wasn't brought in for his bat. He filled the void during Nini's absence, and what's more, was given a chance to get back into the PCL's good graces.
Cuno was sold to Amarillo - a place that he had had tremendous success two years earlier (they finished 1st in the Western League, but lost in the finals) - after his brief stint in Portland, but there doesn't seem to be any evidence that he ended up playing for the Gold Sox that year.
After two more stops in Sacramento, and one in Spokane, he found himself being drafted by the Chicago Cubs in 1960, and would then be intermittently used in 69 games across the next three seasons -- all of which can be read about from the usual sources (see link to SABR page above).
Why this card for the collection? Well, Cuno only has a couple of cards to his name, none of which even come close to the greatness that is his 1962 Topps offering. I might be going out on a limb, but I dare say that it's one of the more interesting cards from the set (top 10?), if only because of the many visible ball imprints that can be seen on the backstop behind him. And yes, Topps misspelled his last name, but they weren't the first to do so, nor were they be the last, so I'm not holding that against them.
I wanted to note too that this card came from, Matt, over at Diamond Jesters, and for all intensive purposes, is responsible for me finally deciding to undertake this project (which also led to the creating of this blog) that had been rattling around in my head for the past decade and change. I can't tell you exactly why the card caused the reaction that it did. I saw it on one of Matt's Time Traveling posts, recognized the fact that it was a former Beaver, and just knew that I had to have it, and that it would be the start of something HUGE! So while I did have some former Beavers (mostly of the vintage variety) set aside, none of them ever triggered me to start this collection, so Cuno here will be forever known as Patient Zero (Player Zero?). I haven't decided yet whether I should thank Matt for his role in being partially responsible for all of this, or if I should curse him for damning me to what will no doubt be a never ending project :)

Looking ahead: I'll be unveiling a new site feature sometime during the early part of next week.
at July 09, 2021 8 comments: